Iain Lawson recently published an excellent article by a guest writer Mia published on his “Yours for Scotland” blog page, entitled – WHAT HAS BEEN THE UNION DIVIDEND?

By coincidence, just before my “sabbatical” I was working on a blog on a similar theme but looking at it from a slightly different angle. This is it.

In the article Mia states tha “a way of measuring the success of a political union is by watching how the population and the wealth of the component countries increase in the same measure, suggesting that the union is balanced and fair.”

Mia correctly argues that Scotland’s “dividend” from the union has been to witness a suppression in population growth due to migration away from Scotland and falling birth rate.

Mia further states that “Migration to Scotland is positive because we need migrants to avoid Scotland’s population contracting. But what we have to be careful about is not to reach a point where the excuse of needing migration is misused as a way to swap huge chunks of Scotland’s original population by population from elsewhere that comes only transiently to Scotland and then leaves without developing any form of allegiance to Scotland or interest for its heritage and culture. It stands to the obvious that a progressive substitution of sectors of the original population of Scotland by another will lead to a loss of sense of nationhood.”

This is where my views diverge from Mia’s as I believe that as an independent nation Scotland could have implemented an immigration policy (just as other normal independent countries have done) which would have attracted people from all over the world (including many of Scot’s decent) who would have built their lives here, grown their families and embraced Scottish culture.

Unionist politicians are constantly telling us that Scotland is supported by the union and is better off from being part of it. Arguments become complex and rebuttal is difficult in the face of false information proffered by self-professed economic experts.

However, there is a very simple and straightforward way to demonstrate how Scotland has suffered and has been kept poor and downtrodden by being part of the union. It also provides further proof (if further proof were needed that Scotland is merely a colony of England). This can be demonstrated by a consideration of the change in Scotland’s population as compared to a number of other nations.

I have chosen to compare populations between 1960 and 2021 although population figures from 1900 to date paint a similar picture.

I have chosen to present in the table below a comparison of Scotland’s population growth with other European nations as well as New Zealand (a country very similar to Scotland in many respects and one with which I am very familiar).

I have also chosen to show the comparison with England – supposedly an equal partner with Scotland in the union. 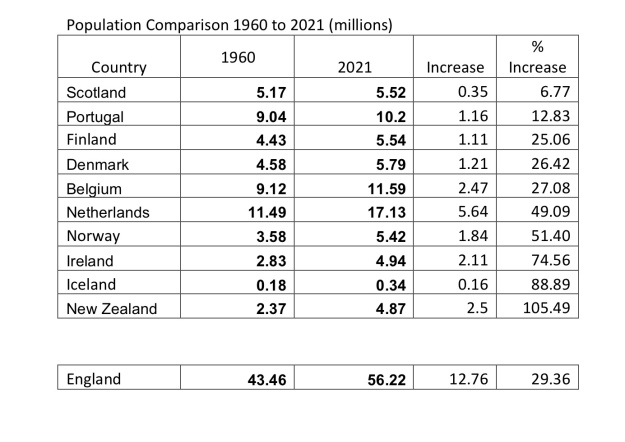 This table demonstrates just how far Scotland has fallen behind all these other nations in terms of development.

I do not believe that there is an independent country in Europe with as low a percentage increase in population as Scotland.

The implications from this are many fold.

Primarily, as previously stated, it confirms Scotland’s colonial status in that our population has been manipulated and controlled throughout our time in the union by our neighbour and colonial master – England.

An independent Scotland will have the ability to set its own immigration policy and will be able to attract suitably qualified people to augment the workforce as well as taking our share of refugees and asylum seekers.

These people would be encouraged to make their lives here, grow their families here and embrace Scottish culture. They would become new Scots while at the same time, respect would be afforded to their cultures.

They would contribute to the tax system and would help in increasing production and growing the Scottish economy.

They would have a positive impact on the reduction of the average age in Scotland thus easing the ability of the Scottish government to meet and increase pensions.

Had Scotland been independent, particularly through the oil boom of the 1980s we could have expected a similar increase in population as say the Netherlands or Norway (around 50%). That would have resulted in a current population of around 7.5 million.

Let’s now consider England’s population increase from 1960 till the present – 12.76 million. Much of that is derived from immigration, largely as a result of colonisation. By rights, had we been in an equal union Scotland could have expected a 10% share of that increase – around 1.3 million.

Returning to Mia’s comments, she expresses her fears that in an independent Scotland, immigration could become transient resulting in a diminishing of Scottish heritage and culture along with a loss of “sense of nationhood”

I do not believe that would be the case. Consider countries from the above table such as Belgium, Netherlands or New Zealand. The population of these countries has grown considerably over the period shown largely due to immigration. The heritage, culture or sense of nationhood of these countries could not be said to have diminished.

The culture of a country should never diminish if the government introduces legislation and measures to safeguard and sustain it. This unfortunately has never ranked highly (if at all) on the present Nicola Sturgeon led Scottish Government’s priorities.

With independence, immigration and development of the country should go hand in hand and should be widespread all across Scotland. This could lead to redevelopment and re-population of the highlands.

However, for this to happen certain measures would require to be put in place such as land reform by taking undeveloped land from (often absentee) landowners into public ownership.

Legislation could be put in place which ensured that only those with Scottish citizenship could own land or property in Scotland – a measure which is adopted by many countries.

The benefits of citizenship would encourage many immigrants to stay long term and embrace their new culture.

I have spent a number of years working in the UAE and Qatar and have witnessed first hand plane loads of young men arriving for work from countries such as India, Pakistan, Bangladesh, Nepal and many other countries. The majority had never left there homeland before and only spoke there own language. After a short period in the country I encountered many of them on construction sites and they had developed a reasonable fluency in Arabic and English.

People are flexible and adaptable.

Introduction of a certain knowledge of Scots, Gaelic and English and of the Scottish culture as a prerequisite for gaining citizenship would help with sustaining our culture.

Notwithstanding, this will not happen overnight and it will never happen if Nicola Sturgeon is allowed to continue with her inert agenda as regards Scottish Independence. We have lost seven years due to her. She has developed into a “safe pair of hands” for the union.

We need action, and we need action now. We need to put in place without delay, a strategy to plot our course and timescale for independence.

The urgency cannot be over-stressed. Time is running out for Scotland.

Unfortunately a number of pro Indy Facebook sites have turned out to be merely pro SNP sites and have blocked a number of bloggers. We have managed to frustrate these efforts to close us down through our readers sharing our articles and building our audience.Sharing in Facebook or on Twitter is very important and helps the Independence message to reach a much wider audience. In addition many have taken out free direct subscriptions. Please follow me on WordPress. I would very much appreciate this support.

News and Opinion from Stephen Fuller

A blog by Iain Lawson

A Wilderness of Peace

"Auferre, trucidare, rapere, falsis nominibus imperium; atque ubi solitudinem faciunt, pacem appellant." - They ravage, they slaughter, they plunder, and they falsely name it "empire"; they make a wilderness, and call it "peace."

A daily selection of the best content published on WordPress, collected for you by humans who love to read.

The Art and Craft of Blogging

The latest news on WordPress.com and the WordPress community.